Passenger in Custody after Driver's Body is Found in Marina Lagoon

The arrest of Monique Weaver, 19, of Sunnyvale, resulted from a warrant unrelated to the traffic stop or the driver's death, said Foster City police Capt. Jon Froomin. When Weaver was searched at the jail, authorities found a substance they suspected was methamphetamine, Froomin said.

An autopsy on the driver, Troy Guido, 33, of Redwood City, is expected to show later today whether he had any drugs in his system when he ran away from police.

The incident began at 5:22 p.m. Monday when a Foster City police officer pulled Guido over for a perceived registration violation regarding his blue Buick Century, Froomin said. Guido stopped in the parking lot of the Residence Inn in San Mateo near the border with Foster City.

Guido jumped out of his car and scaled a fence onto Mariners Island Boulevard while the officer remained with the vehicle, Weaver and another male passenger, Froomin said.

The male passenger was interviewed by police to determine the driver's identity and released. Weaver was arrested.

Police found no warrants against Guido and do not know why he ran, Froomin said.

Witnesses told police that Guido jumped into the water near the Edgewater Isle complex, where he started swimming and began yelling for help. A passerby jumped into the lagoon but was unable to save him.

A diving team from the San Mateo County Sheriff's Department scoured the murky water for hours before they found Guido's body between Marina Court and Marina Vista Way at 10:35 p.m., just as they were about to give up for the night, Froomin said.


The driver of a car that police pulled over in a routine traffic stop Monday fled and was found drowned in the Marina Lagoon about five hours later, authorities said Tuesday.

The incident began at 5:22 p.m. when a police officer pulled over 33-year-old Troy Guido of Redwood City for a possible registration violation regarding his Buick Century, Capt. Jon Froomin said.

Guido stopped in the parking lot of a Residence Inn, jumped out of his car and scaled a fence onto Mariners Island Boulevard, Froomin said.

Witnesses told police that Guido jumped into the water near the Edgewater Isle complex, started swimming and then yelled for help. A passer-by jumped into the lagoon but was unable to save him.

Police arrested a passenger in Guido's car, 19-year-old Monique Weaver of Sunnyvale, on an outstanding warrant. Authorities who searched her at the jail found what they believed was methamphetamine, Froomin said.

There were no outstanding warrants against Guido, police said. An autopsy is expected to show whether he had any drugs in his system. 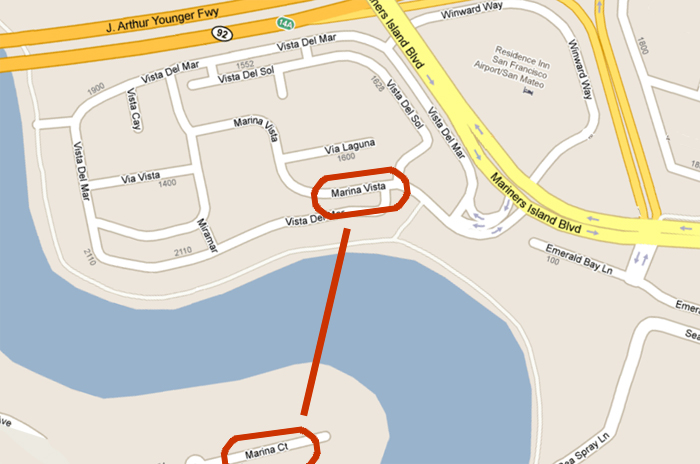