Edgewater Isle is not alone in being obstinate: other HOAs are just as difficult.

Board sent a letter to homeowners, and includes a letter from Association attorney Kevin Frederick "Re: Restated Declaration and Bylaws."

Homeowners received a letter, dated January 2, 2004, asking us to vote on CC & Rs, with a recommendation to vote "yes" and a statement that non-voters will be fined $55.00

I sent an email to Management Company and Board of Directors re questions about voting on bylaws and c c & rs. Wish to be able to vote on each change instead of "all or nothing" approach.

Vice President Milena Marsico replied to my December 31, 2003 email, saying documents have to be voted on as a whole 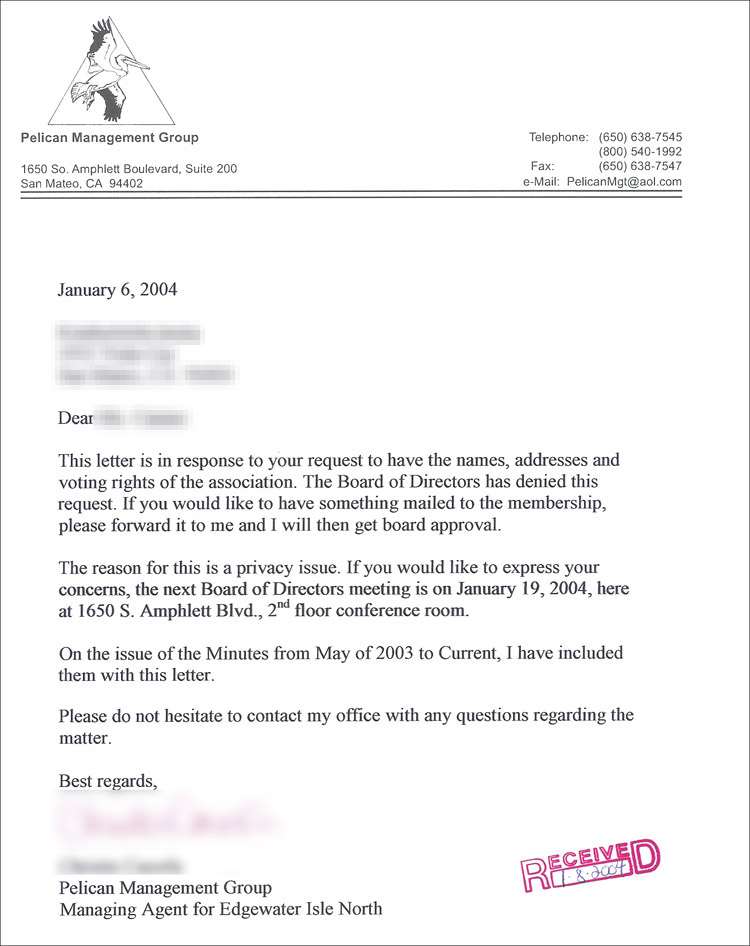 Request for ADR as access to membership roster is allowed under Association's Bylaws.

Homeowners received flyer from Association that new Bylaws have passed, C C & Rs have not, reminding of $55.00 fine for not voting

I filed complaint in Superior Court of California, Small Claims Division, under California Civil Code 1365.2 for Association denying me access to membership roster.

I received letter from Association Attorney Kevin Frederick, saying Association will honor my request for membership roster under California Corporations Code 8330. I would have to agree to (outrageous) mailing costs.

I received letter from Peninsula Conflict Resolution Center. Letter describes procedures, states my half of costs are $150. I mailed a check for $150 on February 5.

I sent letter to Superior Court, San Mateo County, to amend Small Claims case to add the $150 for mediation charges.

Peninsula Conflict Resolution Center contact called me: Attorney for Association has asked if I will drop the case if they give me the membership roster. I asked that they put it in writing.

I replied to Attorney Kevin Frederick, stating the Association has not offered anything they are not already legally obligated to provide

I sent (via fax) a letter to Attorney Kevin Frederick, stating that 26% of the names on the roster do not have associated unit addresses, and I expect the complete membership roster.

I received a phone call from Superior Court. Superior Court had approved my amendment to Small Claims case, and requested that I have the Association served again, and arrange for new trial date. I explained that since I wrote my February 5 letter to the Court, that the Association has rescinded their agreement to ADR, and my costs have been refunded. Court explained that if I put that in a letter, the original trial date will stand.

I sent a letter to Superior Court, requesting the claim amount be reduced to $500 again as the PCRC (mediation center) had refunded me the costs of mediation.

I received letter from Court granting my February 18, 2004 request.

Superior Court finds in favor of Plaintiff, orders Homeowners Association (Defendant) to pay civil penalty of $250 plus court costs of $42.