In an unprecedented action, Edgewater Isle has completed a foreclosure on a unit.

On April 26, 2011, the Master Association foreclosed on 2021 Vista Del Mar, a one-bedroom unit purchased by Andrew Limcaco and Jennifer Limcaco in 2005 for $450,000. Public records show that the purchase was 100% financed (meaning: the homeowners did not have a down payment) and that both North and Master associations pursued the homeowners who had not paid dues in several years.

Public documents were recorded as follows:

During this same time, there are also other recordings of default not related to the homeowners association in addition to the Licmacos' bankruptcy filing.

Homeowner has a 90-day right of redemption

This document finalizes the transfer of title to the Edgewater Isle Master Association. 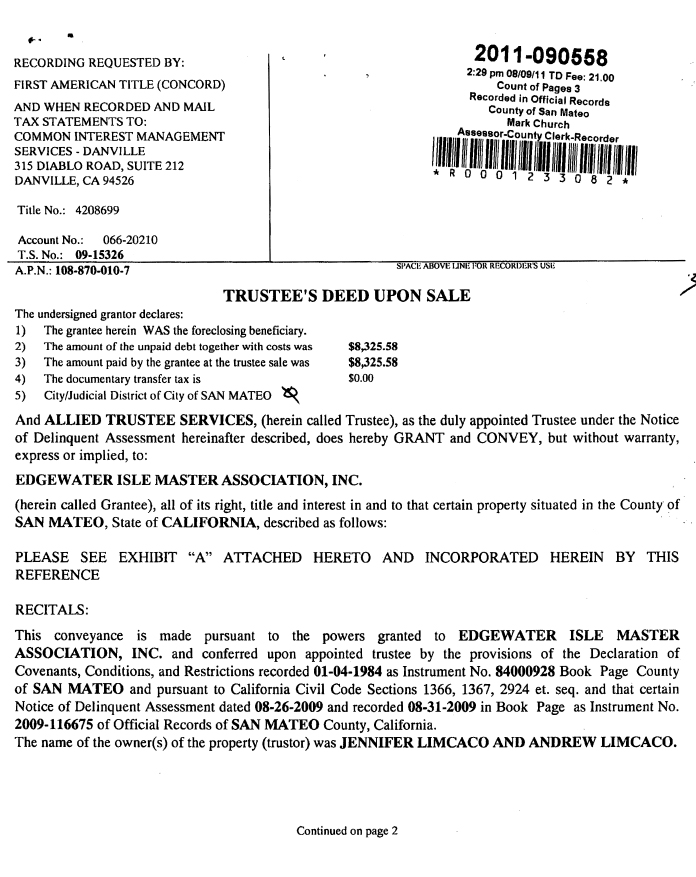 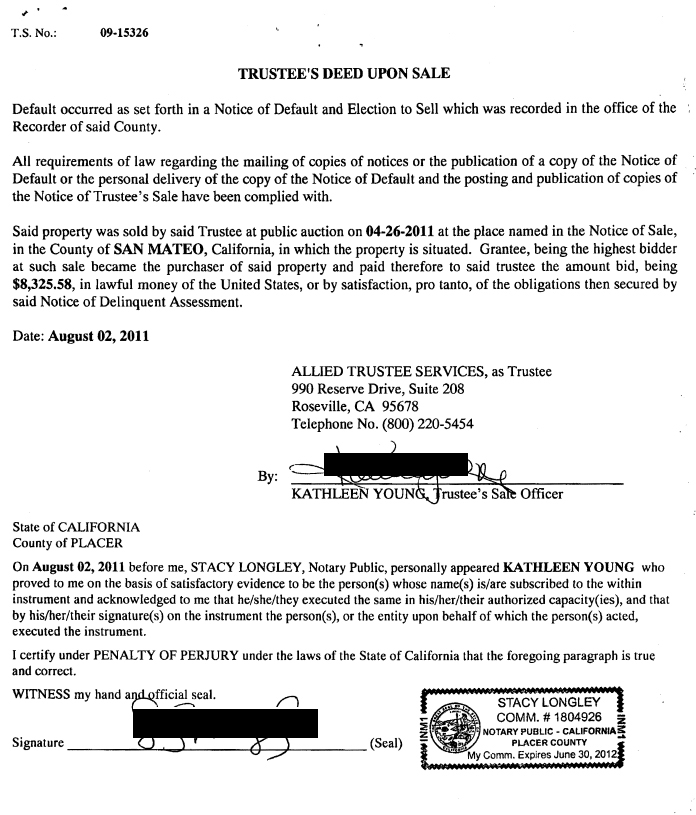 Homeowners: you now own this

Each homeowner in the Master Association has an 1/416th interest in 2021 Vista Del Mar, complete with all sorts of "Notice of Default" and other related documents stuck and stapled to the door and windows. 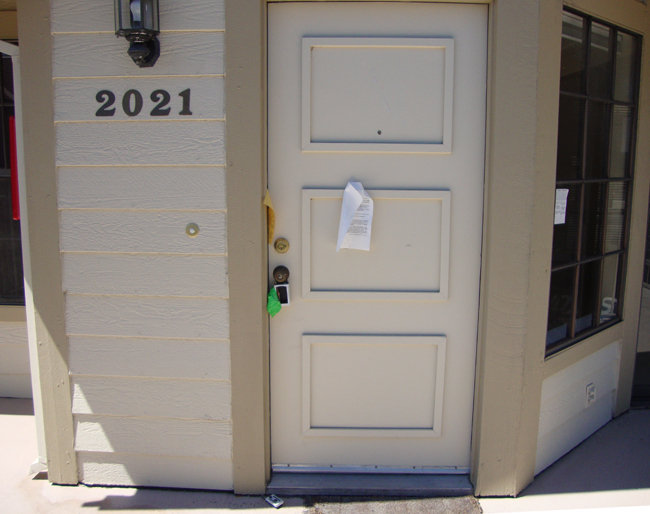 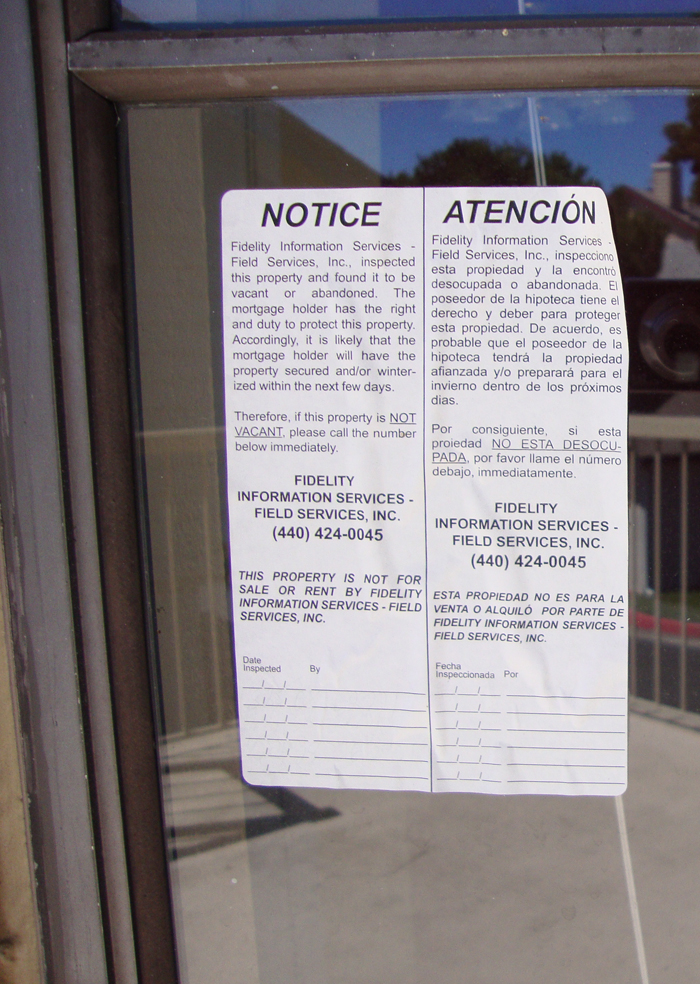 In the bigger picture, there is a lot of blame to go around.

Andrew Limcaco and Jennifer Limcaco never had any equity: this condo was 100% financed. Prices have tumbled since the Limcacos bought this unit. Currently (May 2011) a 1 bedroom is listed for (short) sale for $260,000, which is a decline of 42% in value from what the homeowners here paid.

The boards hold responsibility in this mess for failing to control dues.

The banks hold responsibility in allowing these 100% financed deals.

And finally, these homeowners, Andrew Limcaco and Jennifer Limcaco, hold responsibility: to buy a condo and not make HOA dues payments FOR YEARS is irresponsible. Most who find themselves in an untenable financial problem would sell the condo and move on. Why didn't they?

An article by Bloomberg discusses how some HOAs across the country are suing banks to force BANKS to foreclose on delinquent owners. Because banks frequently stall foreclosure proceedings (as has been the case at Edgewater Isle), it prolongs the time that HOAs go without receiving dues from that unit.

Last month (June 2013), the Master Association listed this condo for rent at $2,500. (And just for fun, let's count the typos and mis-capitalized and/or incorrect words and/or incomplete sentence and/or incorrect punctuation in red):

2021 Vista Del Mar This lovely waterside condo is near to restaurants, many shopping centers, Hillsdale shopping Mall, supermarkets, schools, freeways, Cal Train station, as well as parks, bike trails, and nature. This spectacular one bedroom, one bath at the Edgewater Isle condominiums. Ceramic tile entry, leads to an open dinning area. Kitchen features double oven with bottom self cleaner, range hood with fan, garbage disposal, dishwasher, water for ice maker, ceramic countertops, double sinks, vinyl flooring, luminous ceiling. It is located in a bright sunny area with a very large sundeck balcony. A green lawn that leads to a vista of open wide water. The complex offers a pool, and a clubhouse. 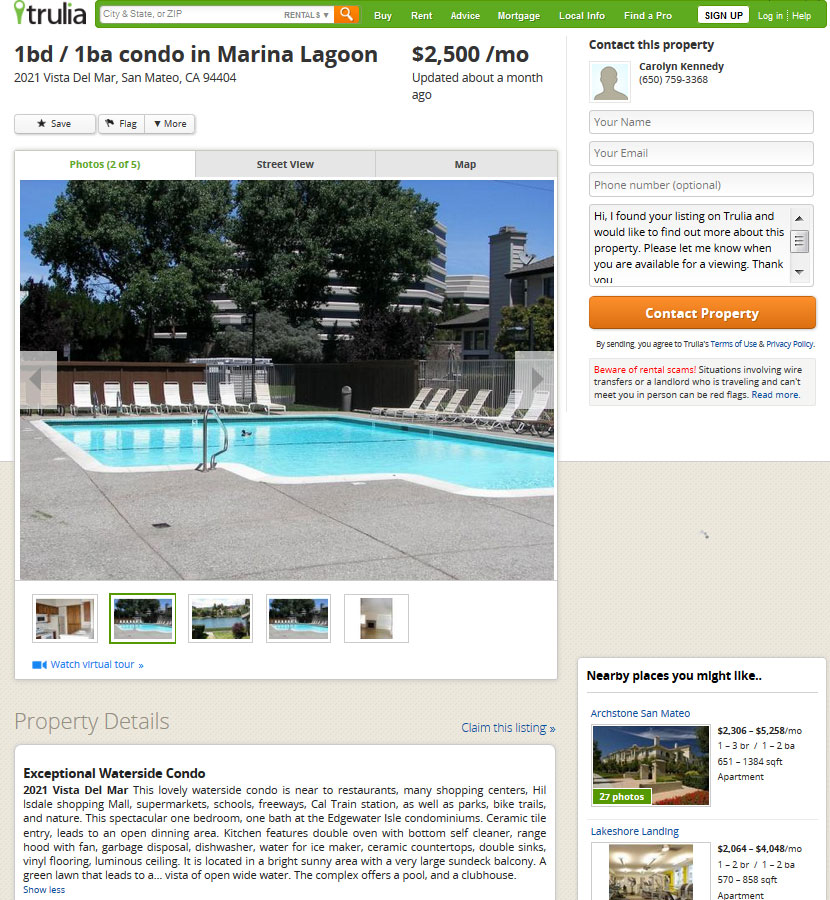 A clubhouse? Hum..... where is it? Also... love the "double oven." No such thing in the photos. And a rental listing with someone who fails to write 8th-grade level English.

Public records show that the Master Association foreclosed on a condo, 2021 Vista Del Mar, in April 2011 and took title to it in August 2011, while the Association was a suspended corporation. The Master Association failed to do anything with this condo for the last two years, perhaps because they were waiting for the condo's mortgage holder to foreclose on the condo as well.

Representatives from the North and Master Associations failed to respond to an email requesting comment.

The North Association filed a small claims case against the previous owners, Andrew Limcaco and Jennifer Limcaco, for unpaid dues of $5,000. The hearing is scheduled for November 13, 2013.

Judgment was entered for the Edgewater Isle North Association for $5,000 plus costs. Judgment against Jennifer Limcaco only: Andrew Limcaco was dropped from the case.

An abstract of judgment was filed against the Jennifer Limcaco on February 12, 2014, for the unpaid judgment.

Read the latest events in the 2019 attempted murders case.