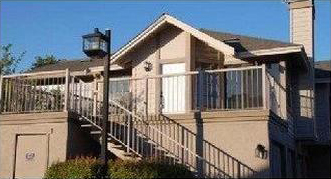 Unless you take action to protect your property, it may be sold at a public sale. If you need an explanation of the nature of the proceedings against you, you should contact a lawyer.

On 1/28/2008 at 1:00pm Financial Title Company as duly appointed Trustee under and pursuant to Deed of Trust recorded 10/27/06, Instrument 2006-162657, Book -, Page - of official records in the Office of the Recorder of San Mateo County, California executed by Mary Aquino, a single woman, as Trustor, WMC Mortgage Corp as Lender and Mortgage Electronic Registration Systems, Inc, "MERS," as Beneficiary, will sell at public auction to highest bidder for cash, (payable at time of sale in lawful money of the united States, by cash, a cashier's check drawn on a state or national bank, a check drawn by a state or federal credit union, or a check drawn by a state or federal savings and loan association, savings association or savings bank specified in section 5102 of the Financial Code and authorized to do business in this state): At the Marshall Street entrance to the Hall of Justice and Records, 400 County Center, Redwood City, CA, all right, title, and interest conveyed to and now held by it under said Deed of Trust in the property situated in said County, California describing the land herein: As more fully described in Deed of Trust. The property heretofore described is being sol "as is." The street address and other common designation, if any, of the real property described above is purportedly to be: 1601 Via Laguna, 2, San Mateo, CA.

The undersigned Trustee disclaims any liability for any incorrectness of the street address and other common designation if any shown herein. Said sale will be made, but without covenant or warranty, express or implied, regarding title, possession, or encumbrances to pay the remaining principal sums of the note(s) secured by said Deed of Trust, with interest thereon, as provided in said note(s), advances if any, under the terms of the Deed of Trust, estimated fees, charges and expenses of the Trustee and of the trusts created by said Deed of Trust, to-wit: $389,485.81 (Estimated) Accrued interest and additional advances, if any, will increase this figure prior to sale.

For reinstatement or payoff quotes, please contact the Loan Resolution Department at: 877-596-8580. Beneficiary: U.S. Bank National Association, as Trustee for the Registered Holders of MASTR Asset Backed Securities Trust 2007-WMC1Mortgage Pass-Through Certificates Series 2007-WMC1 c/o Financial Title Company Default Services, 391 Howe Avenue, Suite 101, Sacramento, CA 95825 PH No: (916)971-8550. Sale information can be obtained online at www.fidelityasap.com Automated Sales Information please call (714)259-7850. The beneficiary under said Deed of Trust heretofore executed and delivered to the undersigned a written Declaration of Default and Demand for Sale, and a written Notice of Default and Election to Sell to be recorded in the county where the real property is located and more than three months have elapsed since such recordation.