Special assessments, lawsuits. Not a big return on investment.

Edgewater Isle North and South each filed a construction defects lawsuit: South in 1991, North in 1994. Each unit at Edgewater Isle North was required to pay an additional $125 a month to fund litigation (i.e., to pay the lawyers). This assessment was to last 24 months when the board decided to forgo the last $125 each unit was to fork over.

Let's do the math:

Edgewater Isle North homeowners paid over $500,000 in special assessments and never received an accounting of it. Where did it go?

After Edgewater Isle North's construction defects lawsuit was settled in May 1998, remedial construction work took place from 2000 - 2001 on all buildings except for Building 18. That building was saved for the end, a big mistake as that's where the expensive problems were. The board of directors blew through the settlement funds, and homeowners were assessed A SECOND TIME to make up for a shortfall to complete the biggest problem.

The reconstruction was done by G B Group out of Gilroy, California. 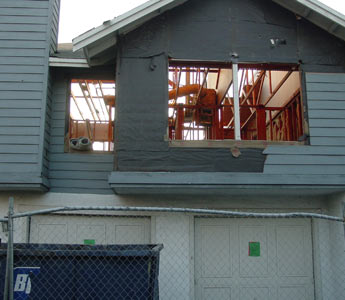 With the recent number of on-the-market ("for sale") condos at Edgewater Isle, a question popped up: what happens when the Associations do not adequately disclose information to buyers?

In the 1990s, both Edgewater Isle South and North associations had construction defects litigation against the builders. California Civil Code §1375.1 (now §6100) provides how the associations are to provide information to owners regarding that litigation. That statute reads:

(1) A general description of the defects that the association reasonably believes, as of the date of the disclosure, will be corrected or replaced.

(2) A good faith estimate, as of the date of the disclosure, of when the association believes that the defects identified in paragraph (1) will be corrected or replaced. The association may state that the estimate may be modified.

(3) The status of the claims for defects in the design or construction of the common interest development that were not identified in paragraph (1) whether expressed in a preliminary list of defects sent to each member of the association or otherwise claimed and disclosed to the members of the association.

(b) Nothing in this section shall preclude an association from amending the disclosures required pursuant to subdivision (a), and any amendments shall supersede any prior conflicting information disclosed to the members of the association and shall retain any privilege attached to the original disclosures.

Maybe someone can tell us where it says there is a time limit on this disclosure. The form that is completed by the associations' property management company (which the seller pays a fee directly to the management company for the completion of that form) looks like this (below) and does not mention a time limit:

Each of the associations listed a long list of construction defects in their lawsuits. Only some of the items stated in the lawsuits were fixed during each association's reconstruction. The remaining unfixed problems tend to be swept away as "the owner's problem" as the years go by. Except homeowners may be better off to tell the association that the present-day damage is actually a result of the undisclosed defects they alleged in their own lawsuit.

Sellers and buyers are both ill-served by this shoddy disclosure practice. Buyers may want to search court records for information on such cases.

Over 10 years ago, Edgewater Isle Homeowners Association (North) went through construction defect litigation and the resulting reconstruction after that. 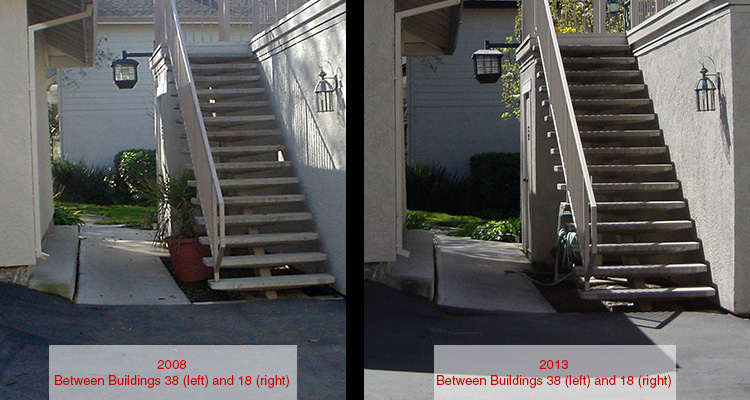 Above: between Buildings 38 and 18 in the North.

Apparent further settling between the garage (building 38) and the residential building (building 18).