In 2019, several local news stories about the random attacks on the bike path in October 2019, and the capture and arrest of the suspect.

In 2004, an attempted murder suspect was caught by the San Mateo Police SWAT team.

A bookie who was operating a sports bookmaking operation out of his home was arrested at Edgewater Isle.

A San Mateo dog recently taken from his condominium complex is home and safe, his owner reported.

Dues are Too High

A homeowner discusses how dues at Edgewater Isle are rising too high.

A second article about the election fraud ran in the Foster City Progress.

An article about the settlement of the Edgewater Isle North construction defects lawsuit ran in the San Mateo Weekly newspaper.

The then-board of directors at Edgewater Isle North attempted to alter the results of a homeowner vote as shown in the San Mateo Times.

Foster City police have arrested a passenger in a car whose driver fled a routine traffic stop Monday and was found presumably drowned in the Marina Lagoon about five hours later, authorities said.

Spraying will continue at Edgewater Isle to eradicate mosquitos.

The Senior Apartments at Edgewater Isle received a tax credit for renovations, forcing the displacement of residents.

Trash Collection Costs are Too High 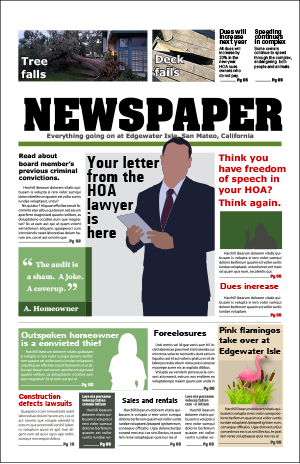