** FRAUD ALERT: The check and the invoice have the same date **

Being on a board of directors can have its privileges. This landscaping situation at Edgewater Isle Homeowners Association illustrates a perfect example of how an unscrupulous board member, along with a complicit board of directors, use homeowners association money to benefit a single person:

Landscape:  Management presented a letter from Owner McGuirk* asking about being on the Landscape Committee.  Charlotte R. advised that the Committee meets on Fridays at 10:00 AM by the pond and Ms. McGuirk was welcome to attend.

Discussion about landscaping in general was held and it was reiterated that only emergencies are being dealt with at this time due to financial constraints and the unknowns of the Building 18 reconstruction.

2. Get Yourself on the Board 2 Months Later

Appointment of New Director:  Upon motion duly made by Charlotte R., seconded by Barbara R. and unanimously carried, Kelly McGuirk* was appointed to the Board of Directors.

A.  Landscape:  ....Kelly McGuirk* asked about the landscaping in her area and was advised that due to financial constraints the Board was only spending money on areas where a safety or muddy ground issues exists.

EDITORIAL COMMENT: That is the same thing Kelly McGuirk* was told 2 months earlier.

Also, meeting minutes show there was not a quorum at this meeting when Kelly McGuirk was appointed.

3. Push Your Own Agenda

4. Volunteer to be the "Landscape Chair"

Discussion was held on the Landscape Committee. For the present, the committee will continue to meet as scheduled (third Friday of every month, weather permitting). Kelly McGuirk* volunteered to write the committee charge. ***HOMEOWNER NAME*** inquired about areas needing re-landscaping and was advised that except for life safety issues, planting would be postponed until after the reconstruction of Building 18 was completed.

EDITORIAL COMMENT: Oh good move. No one is paying any attention to what's happened for the past few months, are they?

5. Get Fancy New Lawn Installed Anyway: Everyone Is Asleep at the Wheel

EDITORIAL COMMENT: See the lines in the brand new sod?

Grounds and Landscape:  Gutter Cleaning has been completed.  The Landscape Maintenance Contract was re-negotiated by Kelly McGuirk* and the paperwork will be forthcoming.  The Board expressed its appreciation for Kelly’s work on this project.

EDITORIAL COMMENT: Landscape contract was "re-negotiated" by the same person who got a free lawn? Conflict of interest? Self-dealing transaction?

6. Oh No, The Homeowners Are Catching On

7. Cover Misdeeds with a Clever Invoice

Have your friends at the landscaping company, the same ones who provided you with the unapproved lawn, to rewrite the invoice to match your version of events. And they do it!

Why is this an invoice for the same work that was expressly proposed and denied on November 13, 2001? What changed? Meeting minutes for the previous 3 years do not show any mention or discussion of any type of "future project designing." Why did it go in the front of Kelly McGuirk's house, the same person who presented the BOD with the same landscaping proposal? Management company DID NOT provide a single document supporting this change.

Why couldn't Pelican Management Company find this invoice when it was first requested? Why did it take another 2 weeks for them to "find" this invoice?

THIS IS BOARD-SANCTIONED FRAUD AND THEFT.

Kelly McGuirk* signed the check for her own lawn that was very specifically not approved.

And, this check has the same date as the invoice. Why is that?

8. If Any Homeowner Raises Questions, Call Them From Work and Hang Up 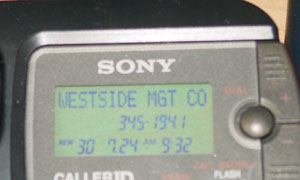 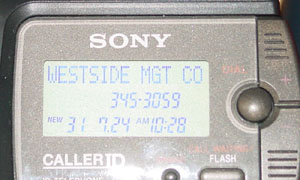 Photos of phone showing Kelly McGuirk called from her work location. (How did she get my phone number? I didn't give it to her. From Association records?)

9. Have Your Board Friends Dodge Bullets with Obfuscation Techniques

EDITORIAL COMMENT: Sherry Mallett's 8/1/2003 statement of the board's "long standing policy" was never substantiated with such a policy. Sherry Mallett lied. Such a "policy" would have been in violation of California Civil Code §1365.02 anyhow.

10. Hide Your Misdeeds Under the Cover of "Executive Session"

Grounds and Landscape:  As Kelly McGuirk* was absent from the meeting, she will be asked to bring the board up to date on the status of the landscape policy.

There being no further business to come before the Board and upon motion duly made, seconded and unanimously carried, the meeting was adjourned at 8:37 P.M.   An Executive Session was held to discuss delinquent accounts, resolution of the landscape issue around the area of 1670 Via Laguna and the completion of Building 18.

EDITORIAL COMMENT:  Landscaping is not defined within as a California Civil Code §4935 topic covered under Executive Session. Even your lawyer knows this is bullshit.

11. Emerge Unscathed Because Board Buddies Will Lie

Grounds and Landscape:  Kelly McGuirk distributed a Landscape Policy.  Sherry Mallett will work with the committee on verbiage for the policy before it is sent to Kevin Frederick for review....

As shown above, in email of August 27, 2003, a copy of the check showing this "board member/homeowner" paid for this cost herself was requested. Sherry Mallett lied that the Association was reimbursed. In 18+ years, they never provided the proof because there is no "proof."

The end of this story is that this board member got herself a new lawn after it was expressly denied. Concurrently, other homeowners went without landscape improvements for years. Edgewater Isle Homeowners Association (Board of Directors) has taken efforts to conceal this from homeowners and has not been forthcoming with requests for information about this. The Edgewater Isle Board of Directors was complicit in the fraud as they knew of it and breached their fiduciary duty to homeowners.

This story is a perfect example of how an association can and does bullshit and outright lie to homeowners, making it up on the fly ("beyond our long-standing policy" that never existed and is contrary to California law). Owners need to see this and know their board of directors can and does lie to you. Sherry Mallett is a liar. Own it.

*Kelly McGuirk is a Convicted Felon

Since this page was published

This page was originally published on or about February 20, 2007.

As of , neither the Edgewater Isle North Homeowners Association nor Kelly McGuirk have disputed in anything published here.