Edgewater Isle North Homeowners Association issued a check to a homeowner to cover expenses the homeowner incurred fighting a rat infestation problem. The homeowner received the check, deposited it 3 days later, only to get it back from the bank with "STOP PAYMENT" notation on the returned item. The check was dated in October, but the homeowner received it in January. 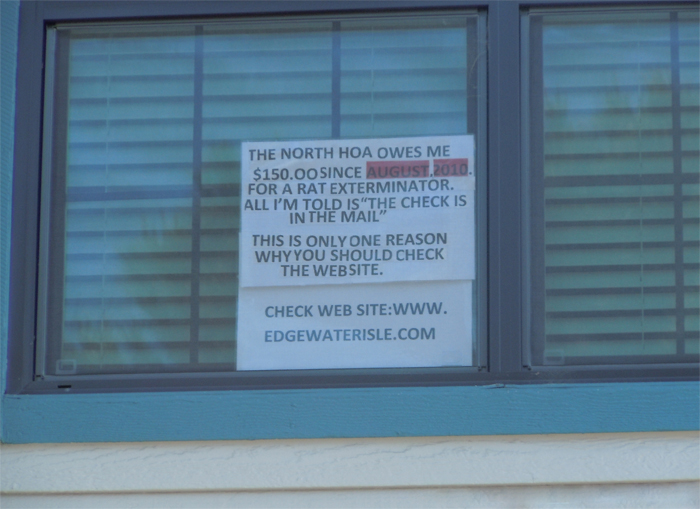 The "Board" says noticed this on a "site walk." Since the sign went up on Friday, May 13, the site walk must have occurred between then and Monday, May 16.

To which the homeowner replied via e-mail and pointed out a little part of the California Civil Code:

(a) The governing documents, including the operating rules, may not prohibit posting or displaying of noncommercial signs, posters, flags, or banners on or in an owner's separate interest, except as required for the protection of public health or safety or if the posting or display would violate a local, state, or federal law.

(b) For purposes of this section, a noncommercial sign, poster, flag, or banner may be made of paper, cardboard, cloth, plastic, or fabric, and may be posted or displayed from the yard, window, door, balcony, or outside wall of the separate interest, but may not be made of lights, roofing, siding, paving materials, flora, or balloons, or any other similar building, landscaping, or decorative component, or include the painting of architectural surfaces.

The law has been in effect since 2004. Why didn't CMS know this?

Wouldn't an association management company and/or a property manager have known this? Shouldn't the property manager advised the "board" of this? This law, which was Assembly Bill (AB) 1525, Longville, was signed by Governor Davis on October 10, 2003, and has been in effect since 2004. In fact, the revised North Association CC & Rs, which were drafted by the HOA's lawyer and recorded in San Mateo County on February 24, 2004, failed to recognize this new section of the law.

That's interesting because we have to ask why this law never came up in Community Management Services' "ongoing in-house training" in the 7 years since it was enacted. Hmmm. Especially since the Legislature included this language when the law was passed:

SECTION 1. It is the intent of the Legislature in enacting this act to provide for all of the following:
(a) That homeowners throughout the state shall be able to engage in constitutionally protected free speech traditionally associated with private residential property.
(b) That owners of a separate interest in a common interest development shall be specifically protected from unreasonable restrictions on this right in the governing documents.

The Edgewater Isle board of directors, and their management company should review the California Constitution, Article 1, Section 2.

So, the association "letter from the board" turns out to be nothing other than a few board members gossiping and directing the property manager to do what those board members ask.

Apparently the gossipy board members and property manager looked up the law they should have known, and they then sent this letter:

Let's count how many times the story changes from the first letter to the second:

It's a rare occasion to see an association back pedal as fast as this one. It's fun to watch how a "site walk" becomes "a few board members noticed." A few "board members" can dictate letters, legal correspondence from the Association, as coming from an entire board that has discussed and voted on the matter and it's recorded in minutes?

Yes, it happens all the time. And see, the North board of directors did not learn from this and did it again.

And yet, the Edgewater Isle North Association later threatens to dispose of owners' property.

An Edgewater Isle North homeowner wrote to say that the North Association is threatening to remove homeowners' property as they see fit.

In its March 2014 newsletter, the Edgewater Isle North Association wrote that any owner who has a security sign in a flower pot will have it (the sign) removed by the board of directors without notice.

In light of the two known Megan's Law offenders and other criminal offenders (e.g., convicted thieves) living at Edgewater Isle, as well as other known violent incidents, why are owners prohibited by "The Board" from protecting their own interest?

The Edgewater Isle North board of directors may be unaware that "traditional tort principles impose on landlords, no less than on homeowner associations that function as a landlord in maintaining the common areas of a large condominium complex, a duty to exercise due care for the residents' safety in those areas under their control."[Frances T. v. Village Green Owners Assn., 42 Cal 3d. 490 (1986.] "Directors are jointly liable with the corporation and may be joined as defendants if they personally directed or participated in the tortious conduct." [United States Liab. Ins. Co. v. Haidinger-Hayes, Inc., supra, 1 Cal.3d 586, 595.]