Details on this case are scarce. 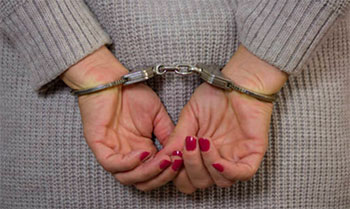 On or about March 5, 1988, San Mateo Police arrested Kelly McGuirk for petty theft.

On or about April 13, 1988, the San Mateo County district attorney's office filed criminal complaint number SM169903A against McGuirk for that arrest. McGuirk pleaded guilty to the charge, a misdemeanor.

Then 33 years later, on March 4, 2021, McGuirk filed in San Mateo County Superior Court a "Notice of motion and motion to dismiss pursuant to PC1203.4" to have the guilty conviction dismissed. (The Sacramento County Superior Court has a very helpful explanation of how that works.) On that same day, McGuirk also filed to have all court fees waived, which was granted by the court.

On March 23, 2021, the court granted McGuirk's motion to dismiss pursuant to PC 1203.4/1203.4a, and this conviction for theft (which appears to have already been expunged because it was over 30 years old) is "wiped from the books." But only to a point: that a Dismissal Pursuant to PC 1203.4 is on record, it means that there had been a conviction there first.

The filing of the motion to dismiss seems to have revived this case because it was not previously listed on the San Mateo County court website, and discussion of this case was first published on this website on May 13, 2021, after the case was revived.

EDITORIAL COMMENT: A defendant, convicted of theft, petitions the court for The People of California to pay the expenses of purging the criminal record of that theft.

Geeez. Does Kelly McGuirk ever pay for anything for herself? We know of at least eight theft convictions, a swindled lawn, "office supplies" expensed to the Association, free ads in the association's newsletters for her husband's business, this manipulative behavior, and that deceptive behavior.

Will the willfilly ignorant board of directors put her back on the board ever again because she seems nice? Good God, people. Wake up.