Board Members Should Quit

I haved lived at Edgewater Isle for the past 10 years, and am currently on its board of directors. I was at the election where the ballots were counted, and saw with my very own eyes that Kerrilyn Cane came in second and should have a seat on the board.

After the election was over, the ballots were turned over to the president of the association, Janet Migliore, by PML management president Steve Fox, who took it upon himself to do this deed without any authority.

Migliore then invited several chosen board members, including one who was a candidate at the same election, to re-count the ballots after holding them for several days, and of course, Kerrilyn lost.

At a recent board meeting, all of the above was disclosed.

The article also quotes Tom Fier, the association's attorney. What Fier didn't say is that he owns three units in the complex and votes as a member of the association as well as being its attorney. To me, this is a conflict of interest.

Who did you vote for, Tom? His final quote, "Does it really matter in the end?" says a lot about how he perceives the complex and its homeowners.

After attending my first two meetings on the board, I have come to the conclusion that most members of the board have their own self-interest in mind rather than the good of the complex.

They want to perpetuate the "good old boys (girls) syndrome." I believe they should resign and give the job to someone who really cares about the complex. 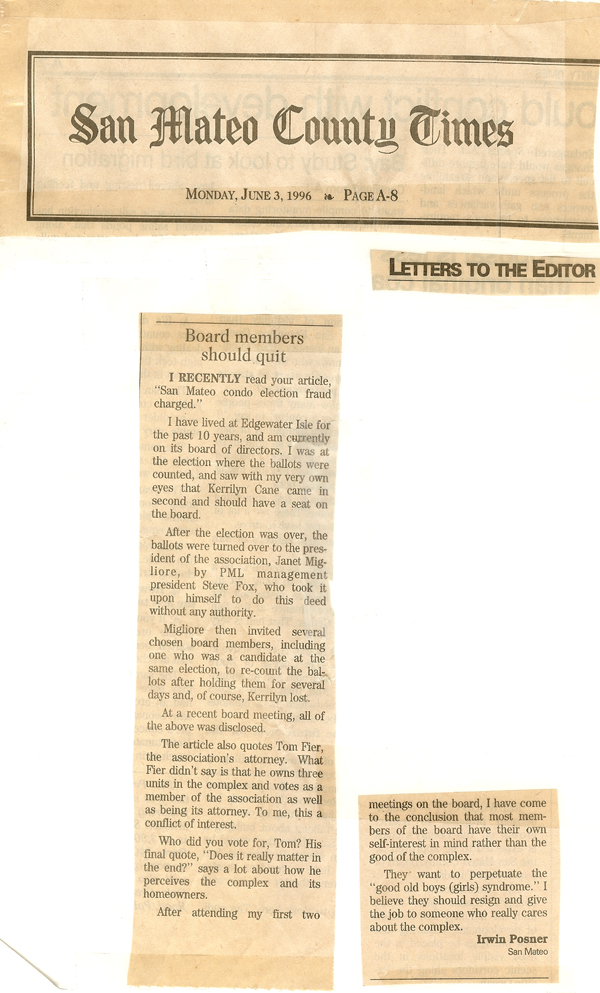 Reprinted with permission of the San Mateo County Times.