Edgewater Master Association had ignored a speeding problem, so a homeowner was left no alternative but to publish his efforts in trying to get something done to fix this problem.

The homeowner approached the Edgewater Isle Master Association for over a year, trying to get their attention on a recurring speeding problem. Board member James Newell wants to "study" the issue, so the board of directors delayed action while purporting to "study" the issue. But nothing in their "study" shows that they ever went out in the morning to watch drivers. Without restoring to a bunch of busy work, including measuring the distances between speed bumps already installed or forming a committee, why not just go out and look at the problem?

And it wasn't hard to see a number of people speeding down the street. Videos taken on a random day, Friday, November 4, 2011, show a multitude of speeders in the complex.

The first video on the right shows a Recology (trash collection) truck speeding through Edgewater Isle on Vista Del Mar. The driver knew he was speeding because he hit the brakes and slowed down when he saw the camera that was capturing him. And take note where the driver and other guy just look at the camera. Knowing they were busted!

The second video shows a car speeding down Vista Del Mar and out the south exit of the complex. The car did not even pretend to stop at the stop sign, and in fact, took the turn at such a fast clip that s/he was forced to drive in the oncoming traffic lane because the speed of the car would have allowed anything but.

And the third video shows more of the same.

What has the board done?

There are 2 previous instances of the Edgewater Isle North association reminding drivers to slow down. Newsletters from the North Association in 2002 and in 2005 included a paragraph that homeowners should slow down. One newsletter reported that the board of directors had received "numerous complaints about drivers running stop signs as well as excessive driving speeds."

Isn't that pretty much what we're talking about now?

Minutes that precede each of these newsletter dates (particularly February 2002 but also April 2005) , however, do not mention this correspondence or complaints at all.

And then finally, in October 2003, the Master Association discusses "an update" of putting in 2 additional speed bumps. But interestingly enough, there is no mention of how this issue began, only the end result: the minutes for July, August, and September 2003 make no mention of any discussion why or how the speed bumps came to be.

It's kind of hard to imagine how the management company, Pargett Association Management, just decided on its own to obtain bids for putting in speed bumps without any prior discussion noted in the minutes.

What else was omitted? Why are the minutes always inadequate? 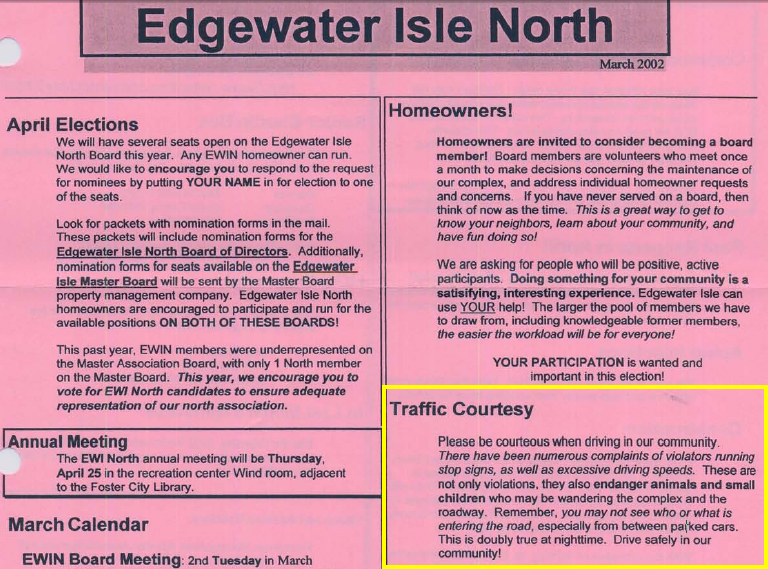 Logic that will make your head spin

In 2010, this homeowner addressed the board of directors to do something about the speeding.

Fast forward a year: the board of directors has sat on its hands and done nothing about the problem while throwing busy work at the homeowner over "forming a committee", but bored board member James Newell said:

"(The homeowner's) input should be considered only as an initial input to get an approval by the Board for a Committee recommendation." BUT..."Based on his input it's not clear that I can recommend a committee be formed."
- Email from "James Newell," Wednesday, September 07,2011 11:53 AM

The Edgewater Isle Master Association DID NOTHING in a year. So, the homeowner who has been trying get the (suspended) Edgewater Isle Master Association to pay attention took his message to the homeowners. A year after first addressing his concerns to the board of directors, the homeowner distributed a flyer throughout the complex urging homeowners to come to the next board meeting and complain of the speeding problem that the board of directors has chosen to ignore.

My name is Shelly Abrams and I am the owner of 2289 Vista Del Mar. For the last year, I have been trying to get the board to install speeding signs on various streets in Edgewater Isle, especially on Vista Del Mar, where the speeding is rampant. I have followed all of the boards requests such as

1. Form a committee
2. Do a survey of the property and the speeding areas
3. Develop a plan to implement  signage
4. Get a complete bid from a vendor

I have accomplished all of these goals but the board, especially Jim Newell , is stonewalling me at every turn. I feel that if we do not address the problem, there will be serious accident. I have seen our vendors, UPS, FEDEX, and even board members drive at speeds that are at least twice the limit.

I would very much like every owner and family in Edgewater Isle who believes there is a problem to attend the board meeting on Monday, November  14th  at 7pm. If you need a ride or want more information, please call me at 650-537-XXXX.

The Board has done nothing but raise our dues each year which lowers our property values. Now that there is a safety problem, they do nothing to solve it.
Perhaps the Board is waiting for a child to be injured before they will act. The bid for the signs was approximately $2500 which is a small percentage of what they waste in a year, especially on bogus legal fees. I hope we have a large reserve to cover a lawsuit if an accident occurs.

This entire issue has been disgraceful and shows the board does not care about the owners of the property. I will carry the ball to the goal but I need your help.

The Master Association Is Inefficient

Board Wastes $800 of Homeowners' Money

The agenda for today's Master Association board meeting included a presentation from a traffic engineer who was supposed to "report and make recommendations regarding the speeding and traffic issues within the community." 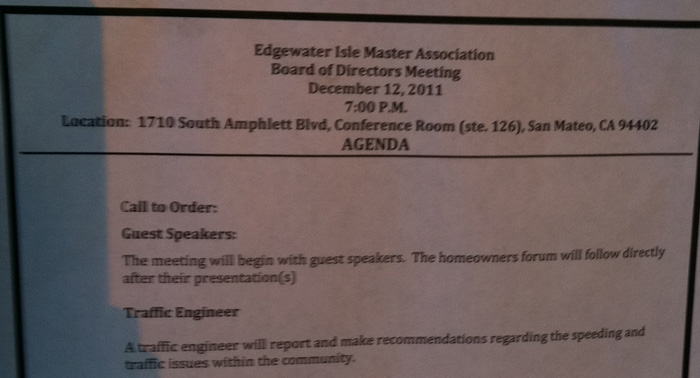 Well, what a waste of $800 that was. The "engineer" showed up without any report and said she had only been out to Edgewater Isle once. TODAY! The engineer told the board that she never had any instruction to write a report.

Then, the ever-stupid board of directors told homeowners that they, the homeowners, couldn't tell speeders to slow down. WHOA! Really?

As if that's not bad enough, look at this recent article in the LA Times about a board of directors who didn't listen to a renter who complained about speeders in their complex:

Although the condo board is not obligated to act on requests by renters, serious safety issues should be addressed regardless of the source.

Question: We have been renting a condo and are in the process of buying it from the owner. My husband went to a board meeting to complain about the speeders on the association's road in front of our condo. We made the board aware that vehicles speed down the street in early-morning hours going two or three times the posted 15-mph speed limit.

We asked the directors if they could install speed bumps where this is occurring. The board said no. The meeting minutes reported: Renter "expressed his concern about cars speeding in the streets by his home. He has requested that a speed bump be installed. Board told him that until he becomes a homeowner, the board will not act on his request."

This is a safety issue, not an owner issue. How can we get the board to take action?

Answer: Although the board is not obligated to act on requests by renters, serious safety issues should be addressed regardless of the source. The board's published reaction in the minutes makes it clear that the association is on notice of the potential for harm caused by speeders in your complex. The minutes also say the board will act on your request when you become an owner. But that will not prevent liability should something happen before that time.

A board's duty to investigate safety issues relating to the association common property arises when the board receives notice that such issues exist. Speeders affect renters and owners alike, and injuries caused could result in association liability for failure to address speeding on association property. No matter whether the board chooses speed bumps or some other method of slowing the speeders down and enforcing the speed limits, it must take steps toward addressing the problem. A thorough investigation of available solutions should be undertaken, and if speed bumps turn out to be the best solution, the board should act to install them.

Any liability for injuries to you or your guests from speeders in the common streets or driveways would attach to those causing the injury. Even without injury, the association might also be liable if it knew of the potential danger but took no steps to correct it.

"Knew of the potential danger but took no steps to correct it." Emphasis added.

But then, this. Why is the Edgewater Isle Master board of directors simply incapable or unwilling to work with a homeowner?

On December 30, the homeowner who has tried to work with the Edgewater Isle Master Association board of directors for over 1 year on this speeding problem received this letter from HOA-industry law firm Berding and Weil. Berding and Weil does its usual job of "documenting the issue" of the "troublesome homeowner" with its predictable pattern of portraying a near-crisis from problems initiated by the homeowner.

Please read their letter and take note of Berding and Weil's characterization of this homeowner, one they'd probably like to sue, and this sort of letter is the first salvo in such an action. It's part of the intimidation pattern that Berding-Weil regularly uses.

Where do we begin?

First, the characterization of "unnerving" is hyperbole and is used for dramatic affect. Lawyers love this stuff. Anyone who has seen this enough times knows that it is typical attorney bravado regularly played by Sandra Bonato.

Second, you may be asking yourself if a HOA-industry law firm is allowed to issue restraining orders on homeowners now? The answer is NO. But that doesn't stop them. They're quite familiar with these sorts of tactics. It is meant to intimidate the recipient.

And finally, the funny part:

"The association recognizes that its efforts to calm traffic might not be noticeable to you."

What a joke. The Association HAS DONE NOTHING which is why nothing is noticeable. Talking with someone over the phone, someone who comes out and looks at stuff without preparing a report IS THE DEFINITION OF DOING NOTHING. Forming committees to talk about stuff is all well and good, but when videos are put up on YouTube showing speeders and an article in the LA Times is written about you, most people would get going. Meetings come and go, your board directors unnervingly yell at homeowners, all while you defend bad decisions and sick your attorneys on the homeowner to deflect your neglect.

And of course, the Edgewater Isle Master Association does not have the courage to name who is complaining, do they? No. Are these "complainers" actually the board themselves? Probably.

And you do this, all the while having meetings while you were a suspended California corporation, filing lawsuits while suspended and failing — TWICE — to show up in court on your own cases and holding meetings, and taking title to a unit.

Get your own house in order. It's filthy.

Today we are mourning the passing of a homeowner and contributor Shelly Abrams (or archive link). We will miss his fearless ways and wish him eternal life.