In what is beginning to emerge as a pattern, Edgewater Isle North today, through their collection agent Allied Trustee Services, filed a small claims case against a homeowner for unpaid dues amounting to $5,000.

We know that owners have to pay their dues, but it appears that the collection agency/HOA has waited far too long to file this case. This homeowner has already been foreclosed upon by the lender, and the condo is currently on the market (for sale) by the bank. The bank completed its foreclosure on August 1, 2011, which is about 1 year after both the bank and the North Association recorded delinquency notices with the County.

Regardless, does this sound like an owner with any money? It doesn't appear so. Chasing this owner may well prove to be a waste of time and effort. Does the Association even know this, or did the collection agency just do this on their behalf anyway? This homeowner moved out long ago, so serving the court papers may prove to be quite an effort.

Former owner believed dues were not owed on a foreclosed property 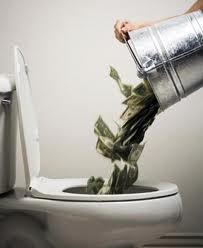 A representative from the North Association's collection agency appeared in court today to represent the Association in its small claims court action against a former homeowner who had delinquent dues.

Danielle Waller, representing the Association's collection agency, had her hands full today prosecuting two delinquent homeowners in two different associations (both managed by Community Management Services, CMS). The Edgewater Isle case was the second of the two to be heard, and Ms Waller explained that the Association was forfeiting several thousand dollars in dues to fit the dollar amount under the $5,000 small claims court limit (the small claims limit for corporations). The defendant, now a former owner, believed that since the condo was surrendered as part of a bankruptcy action no further dues were owed after it (the condo) had been surrendered in bankruptcy court. However, since the title was not taken out of the owner's name until almost a year later, the court commissioner asked the former owner if their name was on the title during that year, and it was.

So it certainly appears that the Association will win its case. Does the collection agency still make the same amount of money on the case in spite of the Association's forfeiting monies due? Or was the Association negligent in bringing the action so late? Time will tell.

The Edgewater Isle North Association has collected on its small claims court judgment for unpaid dues from a former homeowner.

In an April hearing, the North Association was represented by its collection agency. The homeowner had thought that since the condo was forfeited in bankruptcy, the dues were no longer due.